6 Reasons HBCUs Are More Important Than Ever 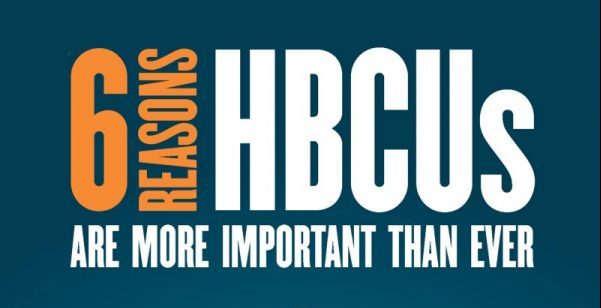 Dr. Michael Lomax, the author, is CEO and president of UNCF.

Every day across the country there is another new headline about students questioning the value of a college degree. Wages have stagnated, college tuition has steadily climbed, and more students are saddled with crushing college debt than ever before. It’s no wonder they are asking: given the cost and investment, is a college degree worth it anymore?

Another question I often hear is, “Do we still need black colleges?” As the CEO of UNCF, the nation’s largest minority scholarship institution, let me tell you emphatically why the answer is a resounding, “yes.”

Here are six reasons that historically black colleges and universities (HBCUs) remain more relevant than ever, and essential to advancing our country’s future.

And HBCU tuition rates are on average almost 30 percent less than at comparable institutions — that’s why they’re often referred to as the best buy in education. At a time when parents and students are more concerned than ever about the cost of attending college, HBCUs deliver higher returns at a lower cost.

2) Meeting the Needs of Low-income, First-generation Students
HBCUs provide a stable and nurturing environment for those most at risk of not entering or completing college: low-income, first-generation college students. Many of these students are academically underprepared for college, yet they’re precisely the students that the country most needs to obtain college degrees.

3) Lower Costs Narrow the Racial Wealth Gap
Though 43 million Americans across the racial and socioeconomic spectrum have nearly $1.3 trillion in college loans, black households are far more likely to have student debt at all income levels. About 54 percent of African Americans between the ages of 25 and 40 have student loans, compared with 39 percent of white Americans in that age group.

By providing a best value in education, HBCUs help to eliminate or reduce student debt for low- to middle-income families, which could dramatically narrow the racial wealth gap between black and white households.

4) Campus Climate Fosters Success
We have known for years that students of color feel more at home and perform better in schools where they feel supported and safe. The student environment fit is very important for student success. A recent report reaffirmed just how important campus climate is to student outcomes. The Gallup-Purdue poll noted that black graduates of HBCUs are significantly more likely to have felt supported while in college and to be thriving afterward than their black peers who graduated from predominantly white institutions.
For more than 150 years, HBCUs have been providing diverse learning environments — from students to faculty to administration — ensuring that every student has a chance to succeed.

5) Addresses the Nation’s Under- and Unemployment Crisis
The nation needs HBCUs now more than ever. By early 2015, the underemployment rate for recent college graduates had reached 44 percent. For African American college graduates, that rate was even higher — 56 percent.

At the same time, the unemployment rate for African American college graduates between ages 22 and 27 is roughly 12.4 percent, more than twice the rate of their white counterparts.

Given their proven track record of influencing the academic success of African Americans, now more than ever greater investment is needed in HBCUs.

6) HBCUs Offer a True Value/Values Proposition
HBCUs are rooted in faith, community and service. Black churches have long been pillars of the black community and the history and life of black colleges are closely intertwined with faith, values and service to others.
That is why I often say that HBCUs offer a true value/values proposition: not only are they are a great value to their students, but they also produce students with great values.

Over and over, we are reminded of the heroes and leaders who have emerged from HBCUs. Whether it’s the kindness of parishioners at the Emanuel Methodist Episcopal Church in Charleston who perished after opening their doors to a complete stranger, or the inspired, nonviolent leadership of Dr. Martin Luther King, Jr., HBCUs produce the very best kind of values-based leadership.

For more than 100 years, HBCUs have been educating minorities, giving them economic opportunities and instilling great values. Not only have they consistently produced leaders in their communities and across the nation, but HBCUs today are consistently and affordably producing the leaders of the future.

So while the debate about college worthiness rages on, I hope we’ve at least settled one question. The next time someone asks, “Do we still really need black colleges?” I hope you will join me in responding with an overwhelming, “yes!”